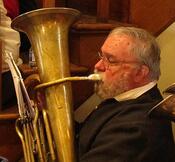 Scott joined Beck's Philadelphia Brigade Band some years ago as a one-time substitute for a concert, at the urging of old college friends who were then members. This somehow became permanent when another tuba player moved to Australia and would be unable to continue with the band! Since then, he has served as vice president and business manager. In 2014, when the previous arranger left the band, Scott took on that job, which has continued to this day. Playing with Becks' Band satisfies both his deep love of history and making music.

Scott is a 1969 graduate of Glassboro State College [now Rowan University], majoring in music and receiving his BA in Music Education. During his college stay, Scott performed in the Wind Ensemble, Symphonic Band, Orchestra, Marching Band, Jazz Ensemble, and numerous other musical organizations. In the community, he has also performed with Salem County Brass Society, the Pitman Hobo Band, the Woodbury Symphony, the Haddonfield Symphony, and many, many show and wedding bands on tuba, electric bass, or string bass. Scott taught instrumental music for 32 ½ years in Salem and Camden Counties, retiring in December of 2000 while he still had some of his sanity left.

Scott is married to his bride of 50+ years, Dutch [a singer] and has a daughter Caryn, a teacher[and a singer] and son-in-law Jack [a music teacher], as well as grandson Josh, a bass and guitar player [an elementary teacher] and Caleb, a sax player, who recently graduated from Rowan University as a marketing major.