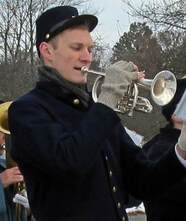 Alex joined Beck's Band in 2015, first as a B♭ cornet player, and then to E♭ cornet. He began his music career in 4th grade playing the trumpet and continued playing through high school and university.  At Rowan University, he studied music technology where he learned recording and mixing techniques.  For an internship, he worked as an assistant recording engineer at Cambridge Sound Studios in Philadelphia.

This experience led to the band becoming a recording group as well as a performing group.  Under the direction of band leader, Jim Beyer, the band records pieces arranged by member, Scott West.  Our recordings can be found under the appropriate link on the website.

When not working as an electrician, Alex can be found mixing tunes on his laptop, on a kayak, or in a good book.