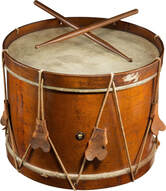 ​Bryan is relatively new with The Beck's Philadelphia Brigade Band. Since early in 2019, he rolled his sleeves up and joined the fight against the traitorous rebellion of the South.  Smartly, he quickly joined up with fellow musicians and grabbed a pair of drum sticks rather than a musket.  After all, musicians during the Civil War made considerable more pay!  Nobody told him that he would have to stand around all day "tapping" out orders to the soldiers.  That's only half as bad as being a perfect target for enemy fire. There is no rest for ANY Civil War musician. We worked like dogs! The word "play" has never felt this much like work.

Around the camp, Bryan plays guitar, writes folk songs, and studies early human botany.  He works all day on heating and air-conditioning equipment.  He also plays in a local 7 piece rock group where you can find him slapping the skins to the golden oldies.  "Come to a Beck's Band event,"  Bryan continues to say, "We are all good folk who just want to play you a song."
​
You can find Bryan and his fellow drummers at any Beck's Band event.  Simply keeping everyone in step.