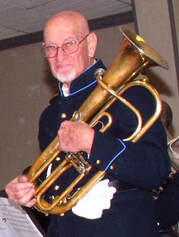 Bob first learned to play the euphonium in high school.  He already knew he would be in music because his early report cards were marked, "Plays well with others."  He stopped playing for two years while on active duty in the U.S. Navy.  He chose to be an aviation ordnance man, maintaining the aircraft wing guns and rocket launchers, instead of attending the Naval School of Music.  As he was oft quoted, "What was I thinking?"

After his discharge, Bob began playing his instrument again, after being pretty sure none of the musical notes had been changed.  He has played in numerous bands throughout South Jersey, and beyond.  In addition to Beck's Band, Bob also performs with the Pitman Hobo Band.  When not playing, he likes resting...a lot.