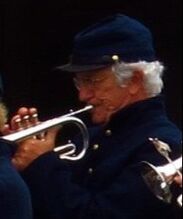 In 1958, at the age of 10, Joe started taking private trumpet lessons.  In 1963, he attended Camden Catholic High and joined their Marching and Concert Band.  After graduating in 1967,  Joe enrolled in college and joined their band.  After graduating in 1971,  Joe put his trumpet away and went to work.  While in high school and college Joe worked for a flooring company and continued with them full time after graduating.  In 1975, Joe started teaching special needs students and while working weekends and summers for the flooring company.

​Joe retired from teaching in 2011, having taught for 36 years, and took a job at a local garden center.  In 2013, Joe met Randy Staub.  While talking about music, Randy invited Joe to visit a Beck's Band rehearsal.  Joe once again picked up the trumpet for the first time in 41 years and started practicing and taking lessons again.  Joe eventually joined Beck's Band, then three years later joined the Pitman Hobo Band.