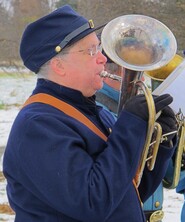 Barbara first played with Beck’s Band as a substitute alto horn in 2016 and stayed.  She began playing trumpet in 4th grade, switching to French Horn in 6th grade.  She continued to play in her high school band, in the Salem American Legion Band and then in her college band.  After college, she took about a 20 year break before rejoining the Salem Legion Band.  She also plays with the Salem County Brass Society, the Pitman Hobo Band and the Salem Legion Brass Quintet.

​Barbara has a BS in Biology from Muhlenberg College (her college band director was Ron Demkee of Allentown Band fame!) and an MS degree in Environmental Health/Industrial Hygiene from Temple University.  She is an Environmental Health and Safety Fellow at DuPont where she also leads the Global Occupational Hygiene Competency.

When not working or rehearsing Barbara serves on the Salem County Historical Society Board and is also co-curator of the Alloway History Museum.