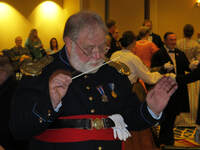 Rich Cummines, Jr. is the last remaining founding member, and has been a performing musician of Beck’s Philadelphia Brigade Band for thirty-one years.  He has served as its music director and conductor for over a dozen of those years. His love of Civil War era history and music was intensely influenced by his grandfather’s fascination with President Abraham Lincoln and the American march music he was surrounded by growing up in southern New Jersey.

Rich holds a Bachelors in Music Education Degree from Glassboro State College, where he studied conducting under Professor Clarence Miller.  He has performed and conducted throughout the Mid-Atlantic region.

Because of his increased job responsibilities, Rich stepped out of his conducting role, and is quite content sitting in the baritone section. He also plays B♭ cornet, alto, and tenor horn parts, as needed.

Although his day job as the Vice-President of Operations at Riggins Oil consumes much of his time, his true joy is in his family and sharing his love and knowledge of music with students and the public.  Richard can often be seen advocating the importance of the arts in education and the importance of remembering our history as Americans.